VIPs at The Department of Children and Youth Affairs

​As part of being a Creative School, we were invited to take part in a workshop to develop a survey to get the views of children for Cruinniú na nÓg.

Cruinniú na nÓg is a creative festival for children and young people in local communities across the country on Saturday, 15 June. Cruinniú will be organised by the 31 Local Authorities and funded by the Creative Ireland Programme.  On the 15th June, free events and creative activities will happen in libraries, community centres, theatres, halls, parks, streets and other places.

They wanted to find out from children what kind of activities would be fun, creative and interesting at Cruinniú in their local area – things they enjoy doing or things they might like to try in the future. So, they asked children from six Creative Primary Schools in Leinster to work with them to develop a survey to help Local Authorities to get the views of children to plan for this year’s event as well as future events. Mary Queen of Angels 2 were one of these six schools asked to take part and it was a fantastic achievement for our school.

Lee and Shane, 6th class students from our School Advisory Council, were chosen as representatives of the school. Along with their teacher, they traveled to the Department of Children and Youth Affairs on Baggot Street where they met 10 other students from 5 other schools. They brainstormed ideas, proof-read and edited questions for surveys, met with graphic designers and they gave suggestions for events to take place. They had a great day and felt a great sense of achievement after the day. The treats and pizza may have also helped with the success of this planning day! 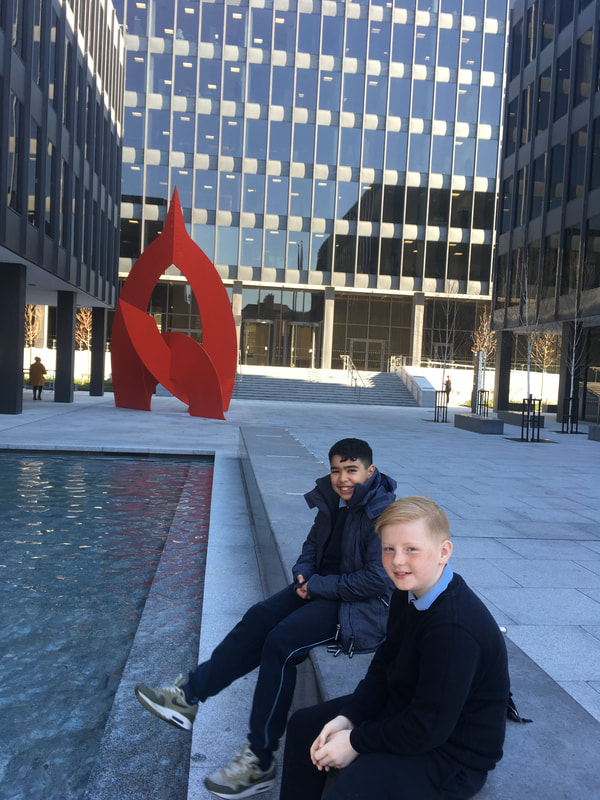 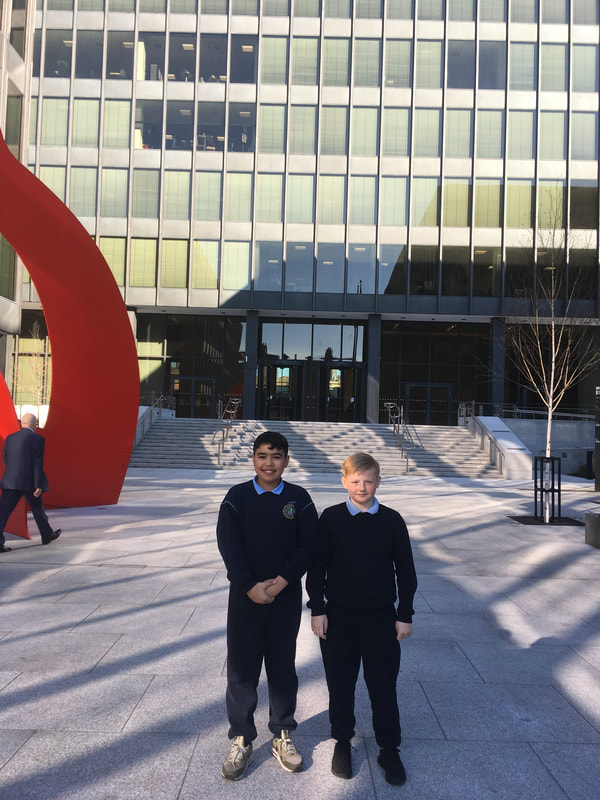 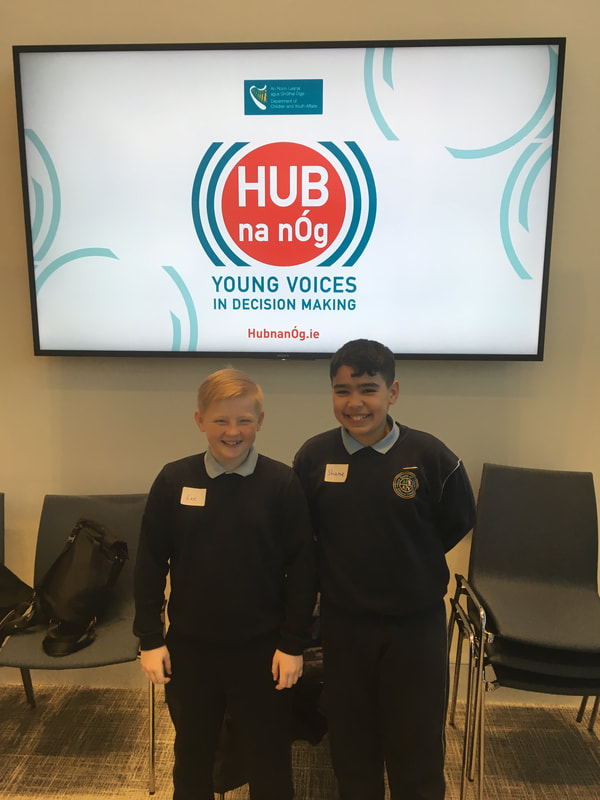 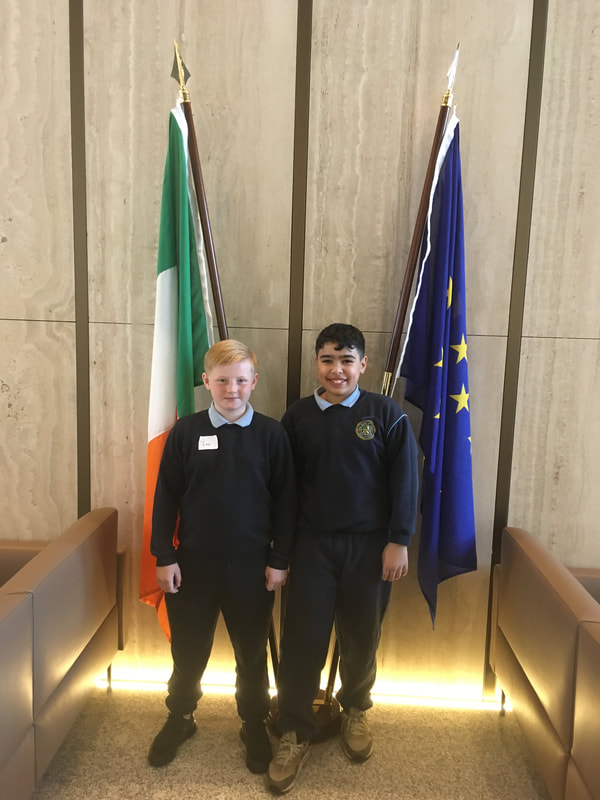 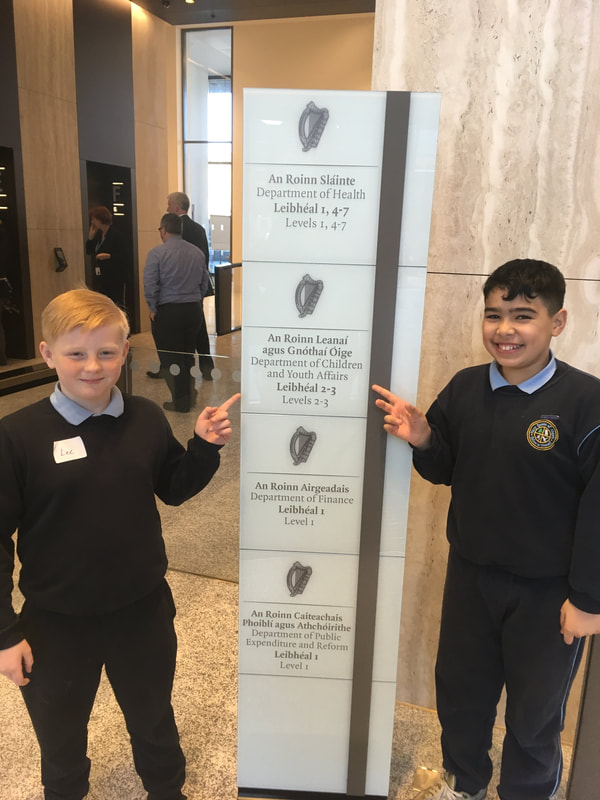 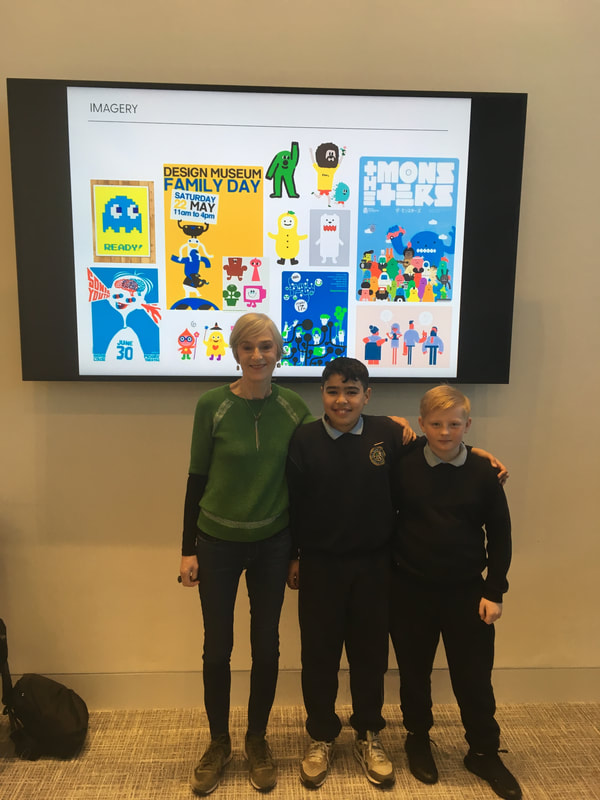 MQA2 were the hosts of this year’s D10 Science Fair following a win in 2017. We were delighted to welcome 7 other schools from the Ballyfermot/Cherry Orchard areas to compete in this annual showcase of Science experiments. It was a great success and we would like to congratulate all participants and thank teachers for their support. It was an even greater success for the 6th class boys who managed to take home both 1st and 2nd prize. A fantastic result for them. 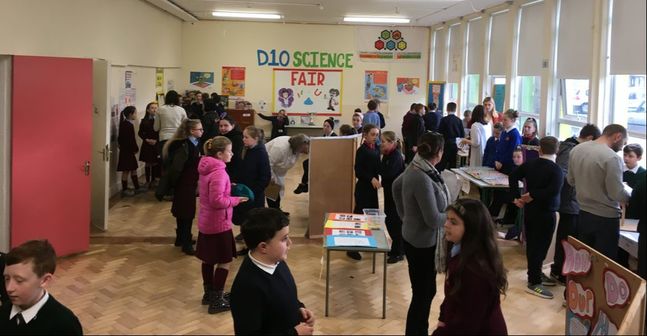 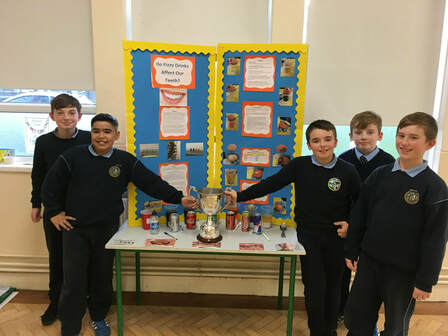 ​1st Place: MQA2 – Do Fizzy Drinks Really Affect Our Teeth?
After a visit from the local dentist and hearing the affects fizzy drinks have on teeth, the boys wanted to see how true it was. The boys used eggs, as eggshells have similar build up to enamel in teeth, and put them in different fizzy drinks for a week. They checked them daily and recorded results of staining and erosion. Congratulations boys on the win!

This year, 6th class took part in the annual Credit Union Poster Competition. The theme for this year's entries was 'The Force of Nature'. The boys created pictures that depicted various natural disasters such as erupting volcanoes, tsunamis, tornadoes, storms, among many others. We were delighted to hear that 3 of our students won prizes for their entries. Jamie Higgins came 1st place, Nathan Manning came 3rd place and Jayson Kidd Murphy was awarded a Merit for his entry. This was a fantastic result for our budding artists. Well done boys. 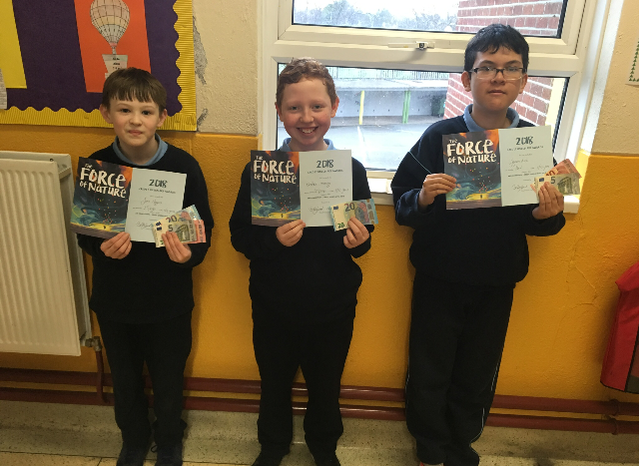 On Tuesday May 22nd, two representatives from our Green School Committee, Seán and Jamie, along with Miss Lawlor and Ms Keogh, travelled to DCU to collect our lovely new green flag. This was awarded to the school in recognition of the hard work being done to help and protect our environment. Well done to all of the boys from the committee and Miss Lawlor for their dedication in tackling the areas of litter and waste in our school and our community. Join us for our official flag-raising ceremony this Friday at 1pm, and wear something green if you can! 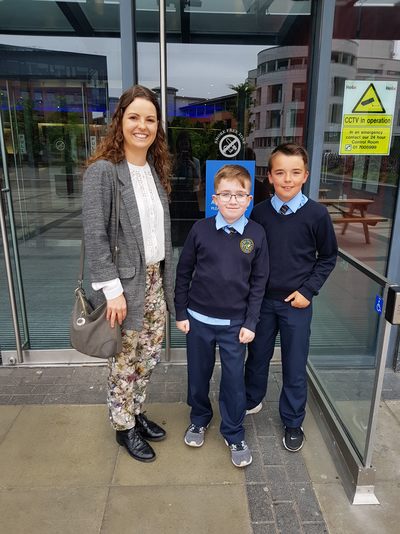 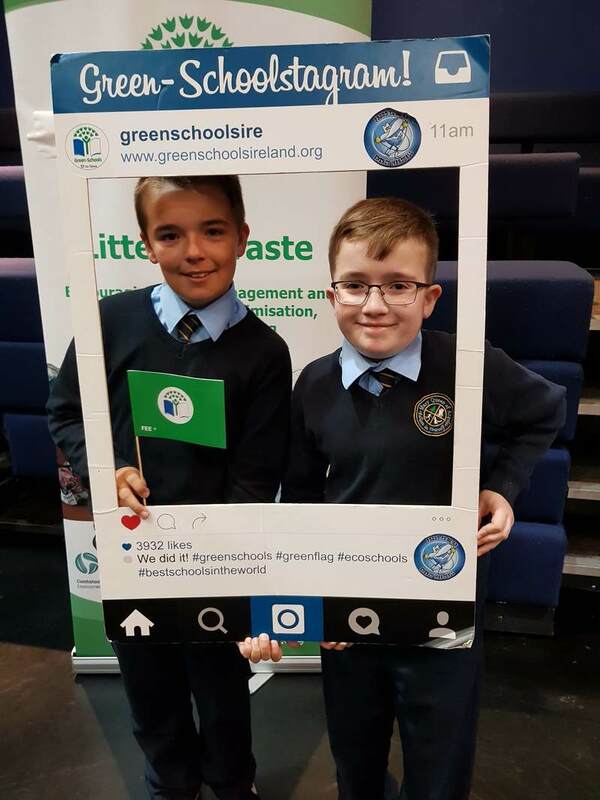 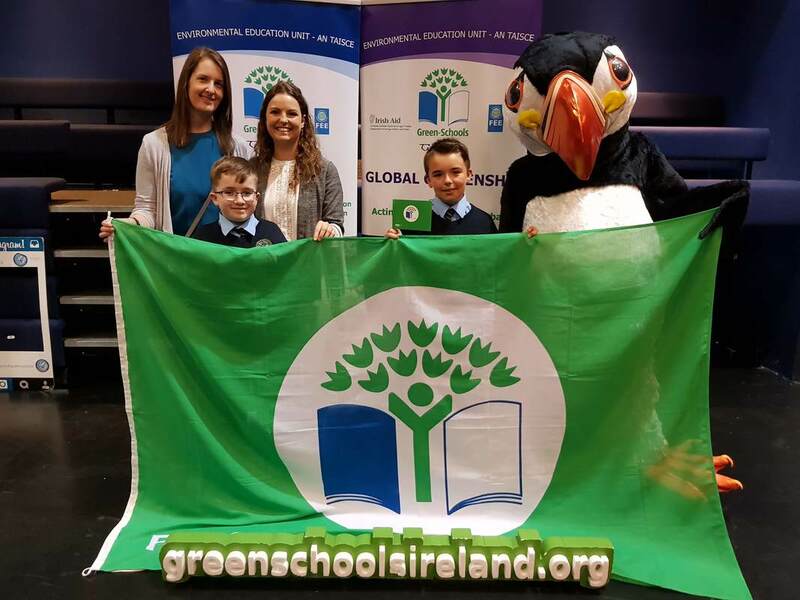 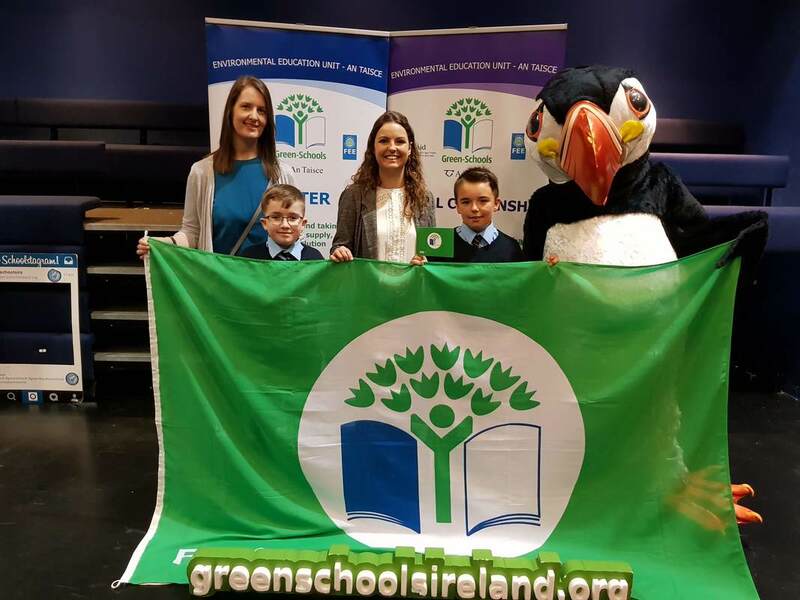 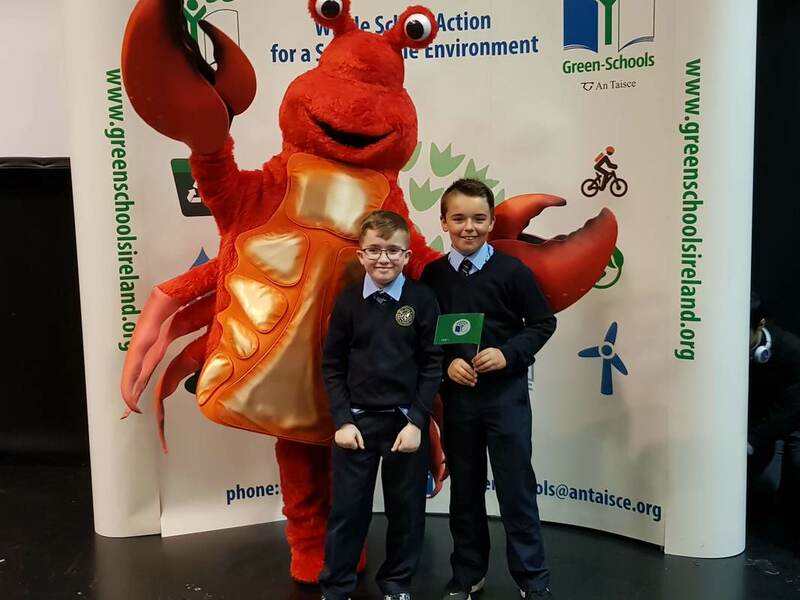 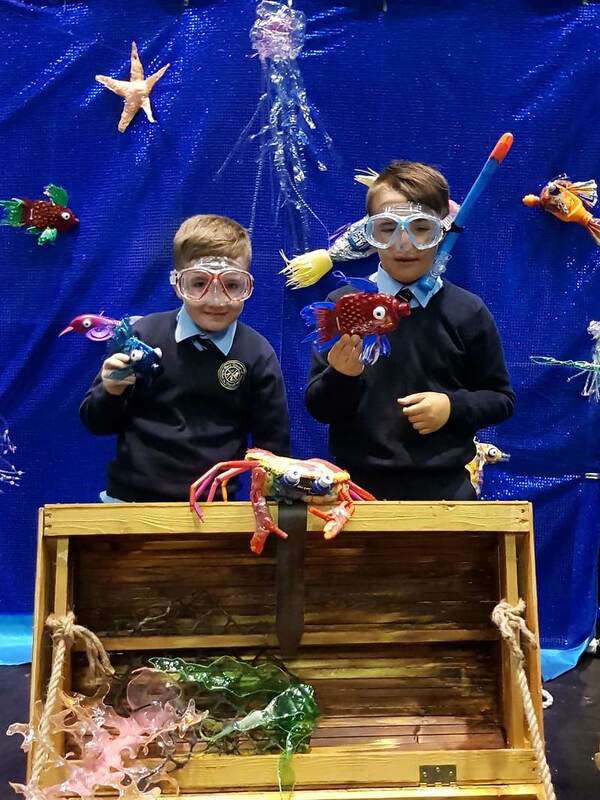 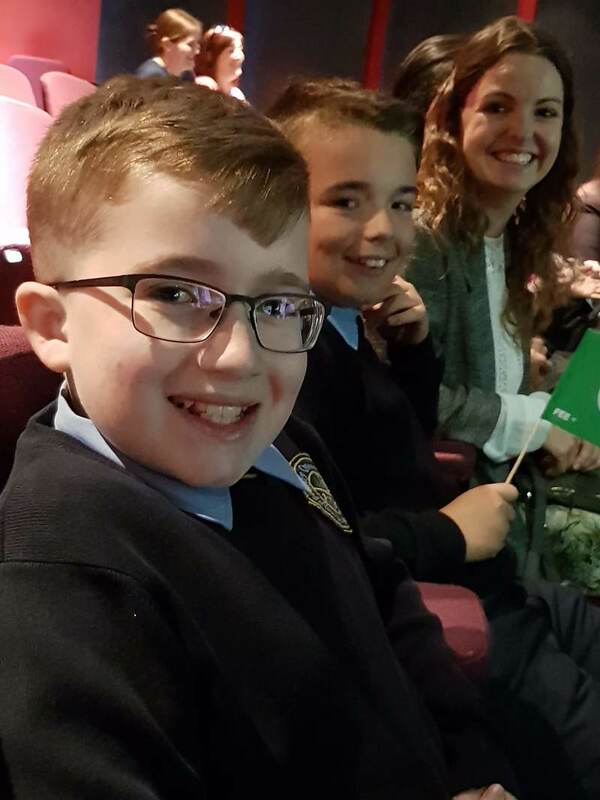 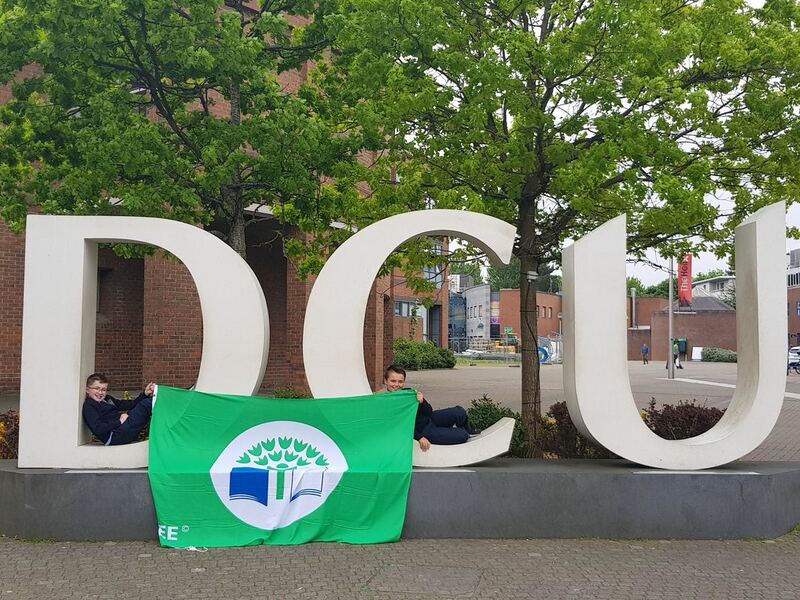 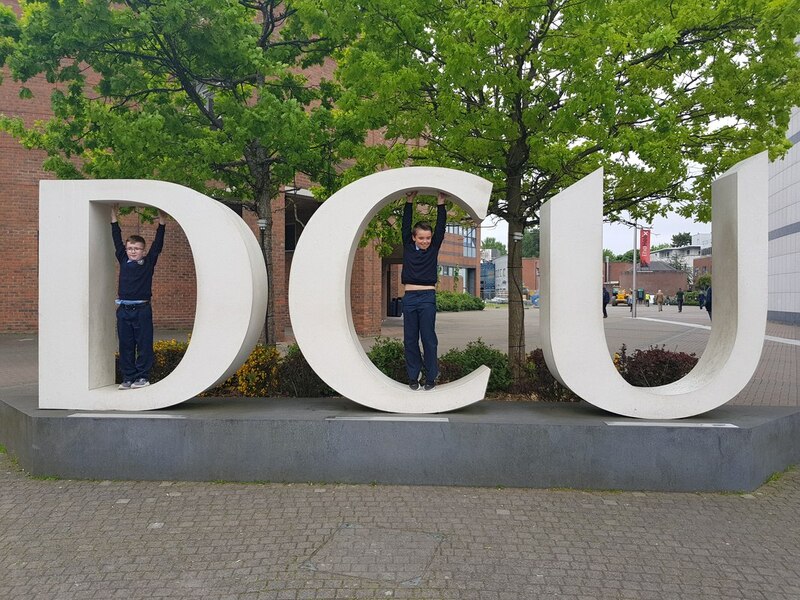 A group of six boys from 6th class competed in the Dublin 10 Science Fair Competition. This was the first year the school has entered, so the boys were unaware of what to expect. The boys brainstormed ideas for their project and wanted to do research that wouldn’t usually fall into their Science lessons in school. They narrowed their ideas down to one: ‘Can Music Help to Overcome a Stutter?’ This was an idea one of the boys got from watching Channel 4’s ‘Educating Yorkshire’, where he saw a teenager overcome a stutter with the help of music. 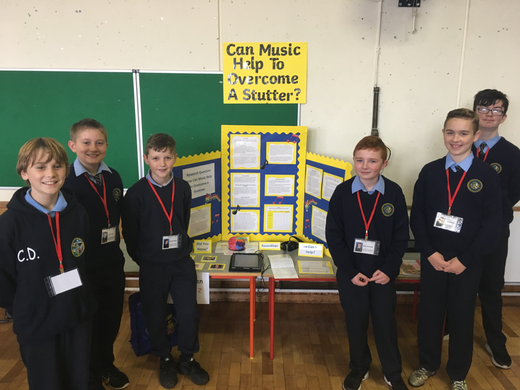 Procedure:
The boys researched stutters online and became familiar with information they found. After this, they recorded their peers reading a text without music and then with music. After recording all of their classmates, they compared what they found and recorded the results. 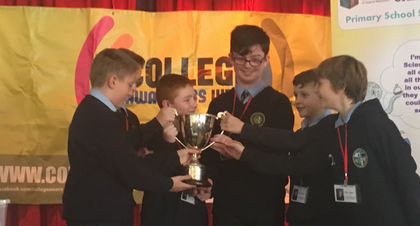 Results and Findings:
The boys found that each of the boys read more clearly and fluently when music was being played. The class all agreed that they preferred reading with music being played and that it helps them focus. In 6th class, we hope to play music in the background to help us with our reading.
The boys were highly praised for their project and their presentation skills. They did themselves and the school proud and it was such an achievement to win the D10 Science Fair. Well done boys!! 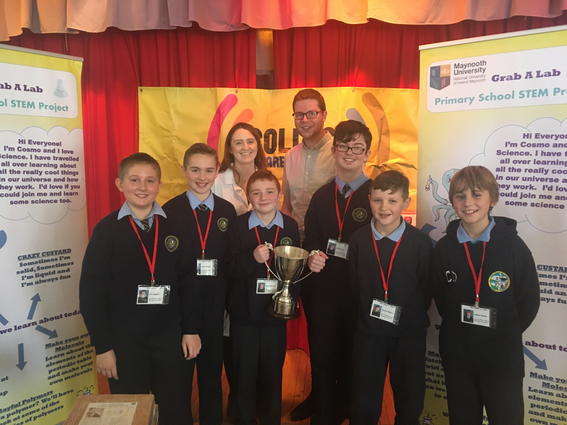 Cumann na mBunscoil Champions 2014
October 23rd 2014 was a great occasion for Mary Queen of  Angels when the school won the Sciath Ó Donnchú final in Croke Park.
It was another great day for Mary Queen of Angels which has a great tradition of competing in gaelic football. We are already looking forward to next year's competition! 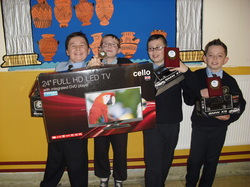 Credit Union Table Quiz
Our junior team did really well in the Credit Union Quiz this year. They beat off stiff competition from the other Ballyfermot Schools to take 1st place in the Ballyfermot Area Quiz. Well Done Boys!!

WEEE Collection
We are currently collecting batteries for recycling in the school. There is a collection box in the office. The batteries are collected and points awarded depending on how much is collected. The more we collect the better the chance of winning prizes for the school.
We are delighted to announce that this month ( November) we received a prize of a sports kit bag with sets of bibs and cones as a reward for being in the top ten schools in the Dublin city area.
Well done to our collectors and please keep bringing in your used batteries.